I love going to Melbourne for weekends or mini stays and this time I was staying with one of my dear friends.  Karen told me she had a surprise for me and had booked a day tour. Could I dare hope it was a day tour to the Yarra Valley! I visit Melbourne each year but had not been to their wine areas.Saturday morning, we were up bright and early, well early, but it was not a bright day, a wonderful cold and wet Melbourne day was waiting for us. When the coach belonging to “The Australian Wine Tour Company” pulled up I let out a little squeal! Yes, I was off to the Yarra Valley.

The Yarra Valley, located just 45 kms east of Melbourne (western side of the Great Dividing Range) was Victoria’s first wine growing district. Vines were first planted back in 1838. Like other areas in Australia, production decreased and it was not until the late 60’s that replanting began. The Yarra Valley is now recognised as one of Australia’s foremost cool climate wine producing regions. 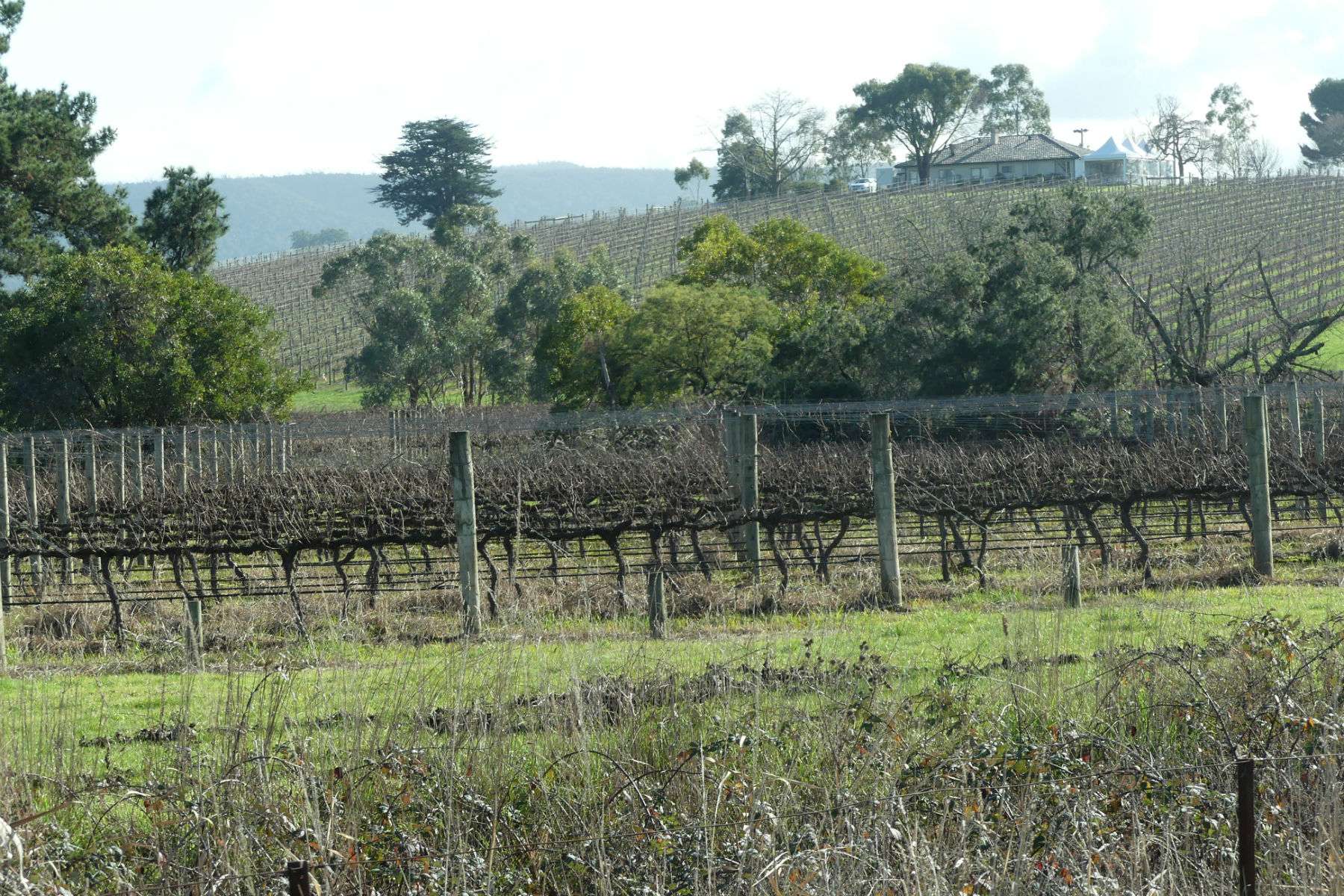 Want to find out more about Melbourne? Including our favourite tours, latest specials, travel information and plenty more.

See our Melbourne Things to Do Travel Guide.

Our guide Tony, use to operate a wine bar, he was very knowledgeable and the perfect person to spend the day with. He imparted his knowledge freely and enthusiastically all day. In my opinion the rain and fog only enhanced our day, it added another layer to it.

What I was most surprised about is how close Yarra Valley is to Melbourne, we were at our first winery in no time. 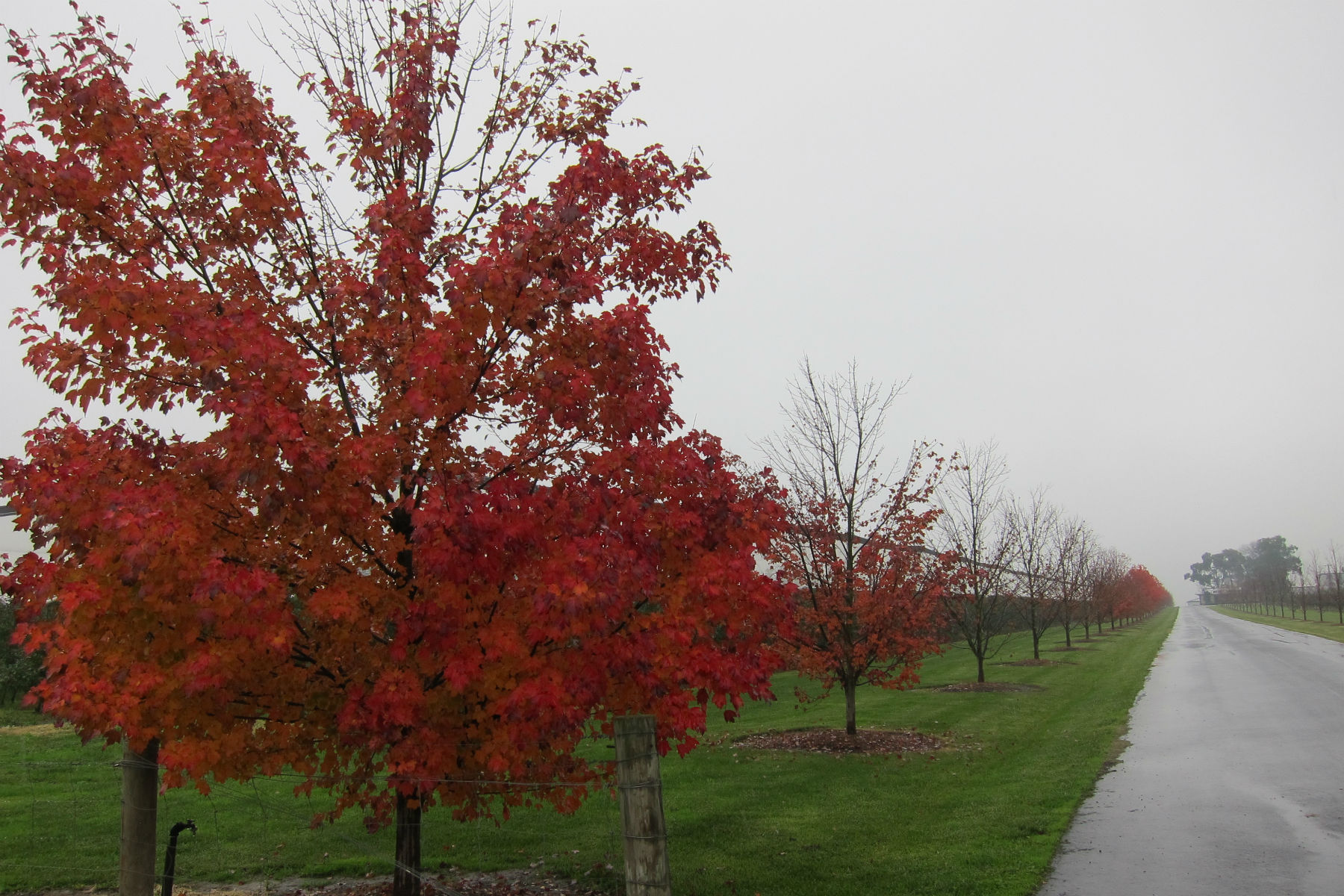 See all our Yarra Valley Tours

Yerling Farm was our first stop. As you can see in the photo it has a lot of charm and heritage attached to it. I think my little friend was still feeling the effects of the night before as she advised us all she was feeling a little tipsy after the first 2 tastings and there were more to be tried before it was back onto the coach!

Yerling Farm is located in the heart of the Yarra Valley. Originally there was a town called Yering and this old winery got its name of Yerling Farm as a result of the location. It has been producing wines for 100 years. It produces several verities but is noted for Pinot and Chardonnay. Even at 10.00am the Pinot appealed and I bought some!

Next winery on our route for the day was Soumah, it was also our lunch stop and what a good choice it was! They have a wonderful room overlooking the vineyards and the valley. Their menu is influenced by Northern Italian cuisine and I couldn’t have been happier!

This winery is focused on wines from Northern Italy. After living overseas for years the owners wanted “elegance and honesty” in their wines. They produce some wonderful wines including some unusual wines, Savarro  being one of them . It is a parent grape first recorded in 10th Century. See the photo for the grape family tree, truly interesting.  After another interesting wine lesson, it was time to move to our next winery, Punt Road. 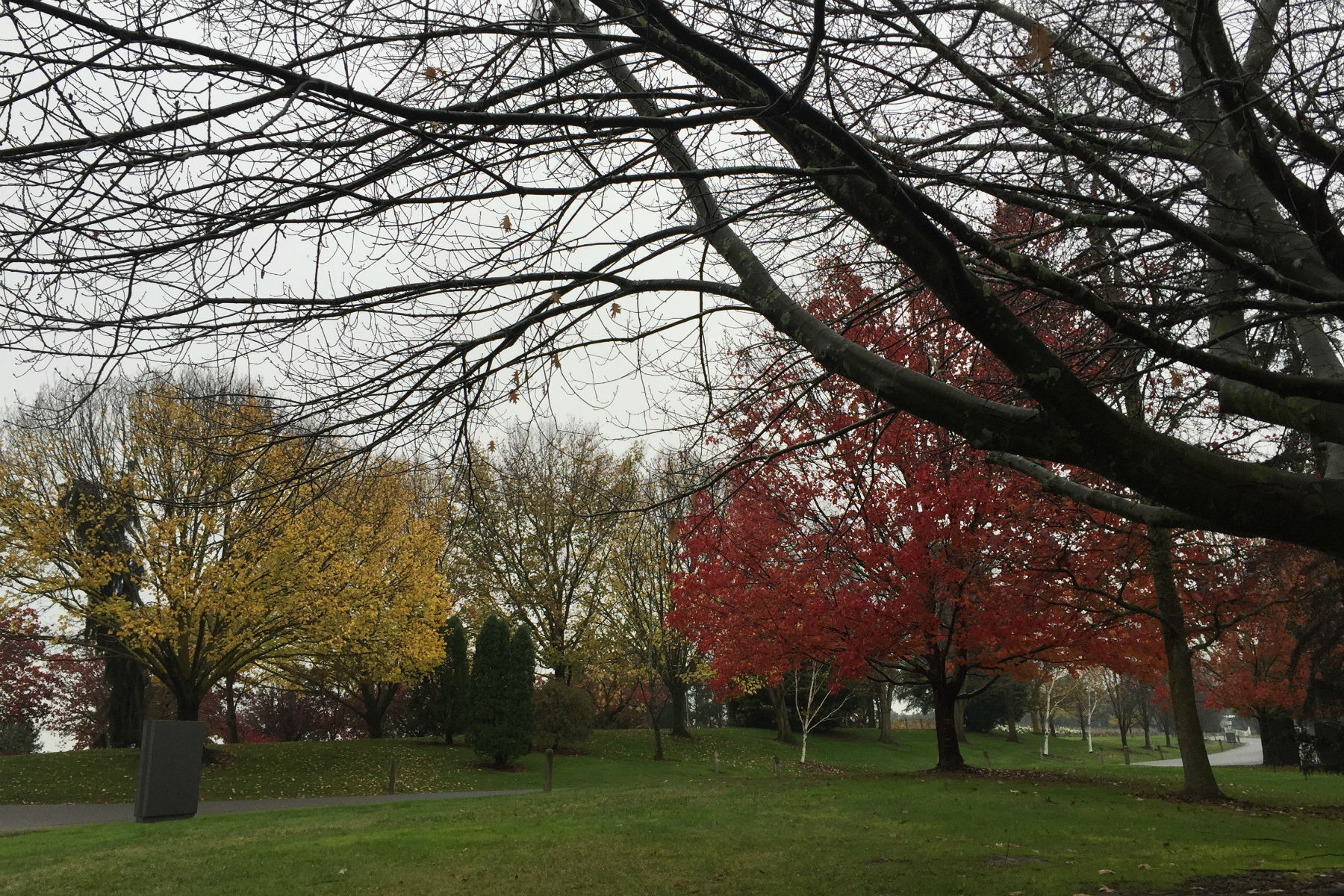 See all our Melbourne Food and Wine Tours

The driveway to the Punt Road winery was beautiful, the autumn leaves were on fire! I had to get the guide to stop the bus so I could pop out and photograph them. This was one winery that I knew their wines so Karen and I were looking forward to the visit. Sadly, the staff member was not interested in telling us the story about Punt Wines, his enthusiasm was missing.
Not to be deterred I asked questions and really liked their dessert wine so bought a bottle. I had plans to drink it with the beautiful Roquefort cheese (one of the worlds best known blue cheeses) which was waiting at home for us.  I was never able to eat blue cheese until a sommelier in a French restaurant said this was a match made in heaven and I have to agree! Try it!
Return to Top 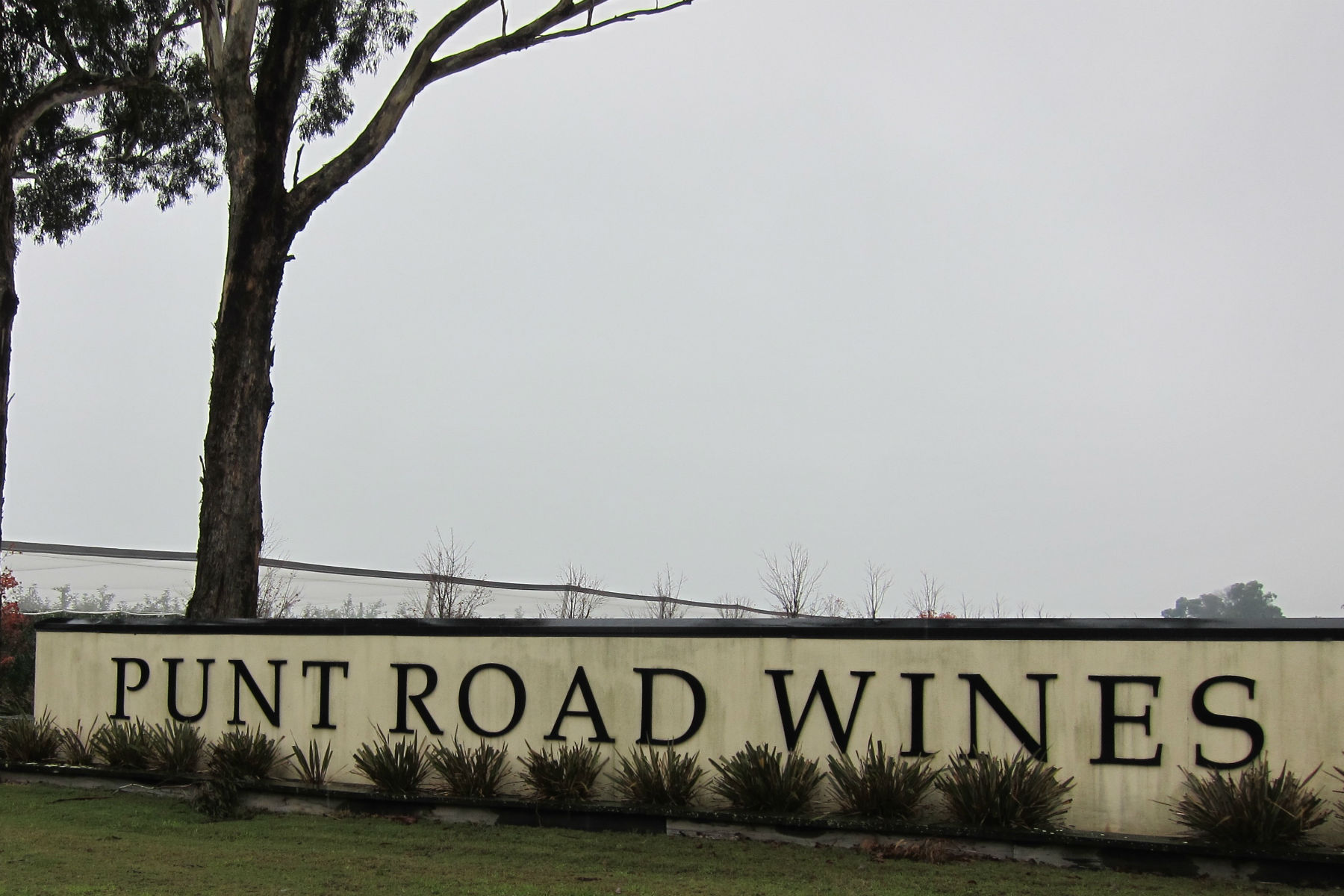 Now for the last stop, Chandon!  We all know or have heard about this wonderful winery. Australia is very lucky that Moet and Chandon had a vision that sparkling wine could be produced elsewhere in the world and Yarra Valley was the perfect spot. Of course they also produce great still wines as well. Chandon was created in 1986 and is a beautiful winery to visit. It has a fabulous buildings and gardens which overlook their vineyards.

You are able to go on a self guided tour and the information is displayed in an innovative way. We were fortunate to have Tony our guide, come along on the self guided tour with us. By this time, we had been together for 6 hours and his interest and enthusiasm to educate us never left him.

At the end of the tour we headed for the Chandon Tasting Bar, we got to decide which type of sparkling wine was to be our last glass for the day. I could not think of a better way to finish the day.

Everyone was fairly quite on our way home, in fact most of the bus had nodded off. However Tony was still happy to answer my questions and he also gave us recommendations to great restaurants and music venues. I have recommended this tour to lots of friends and locals alike and for the life of me I cannot understand why I didn’t make a day in the Yarra Valley a priority on previous visits. I cannot wait to return to visit other wineries and discover their hidden gems! 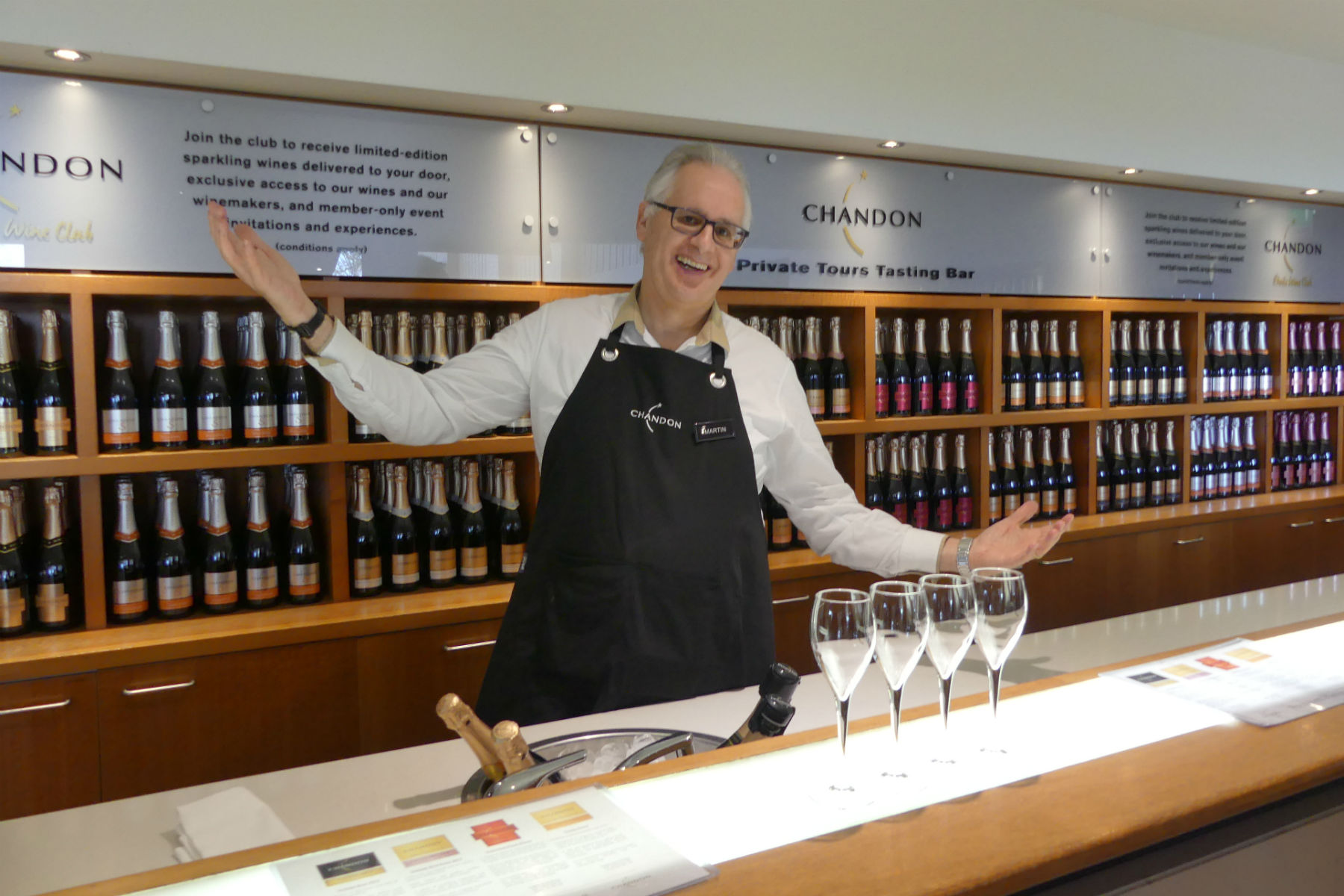