One of the best places in Tropical North Queensland to see crocodiles is at Hartley’s Crocodile Adventures.  It is located approximately 40 minutes along the Captain Cook Highway from Cairns, although you may wish it to take longer as the roadway is one of the most scenic in Australia as it meanders along the edge of the Coral Sea.  For visitors to Port Douglas it is just 20 minutes south along the same road.

For this tour I chose a self drive general entry option, however there are several different tours that can include transfers from Cairns, Cairns’ Beaches and Port Douglas. 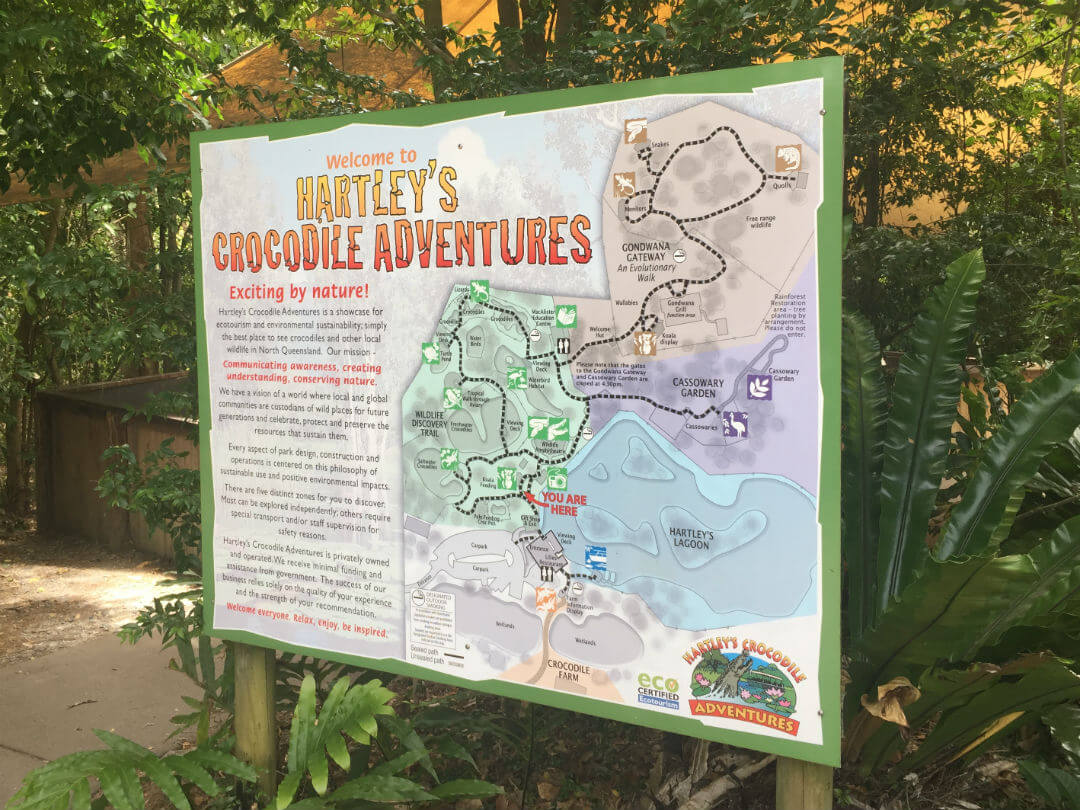 After checking in at the Hartley’s Crocodile Adventures reception and receiving a boat ride ticket, map and brief overview of the park, we went on the Wildlife Discovery Trail, past the gift shop and large lagoon viewing deck. It was here that I saw a koala for the first time. They are so cute, I really want to cuddle a koala but they are so busy sleeping! I decide instead to continue along the Wildlife Discovery Trail.

The first crocodile that I came across was a freshwater crocodile. They are a light brown color with darker bands on the body and tail. The shape of the snout is unusually narrow and tapering, lined with really sharp teeth. Some of them could be seen sunbathing as they opened their mouths, whilst some were just floating on the water. Sometimes they arise on the surface of the water then dive again, and suddenly one was very close to me – quite scary the first time even though we are behind the enclosure. The enclosure is so large and gives the feeling of literally being in the wild with these amazing creatures.

There are several types of crocodiles including the more fearsome estuarine croc – with a much larger and broader snout than the freshwater ones. Later in the day I learned that estuarine crocs can also live quite happily in fresh water. I continued to the next enclosure which had a crocodile with a strange shape. It was actually an Alligator that can be distinguished by its rounded snout and when its jaw is closed, not many teeth are visible – but for me it’s still scary! 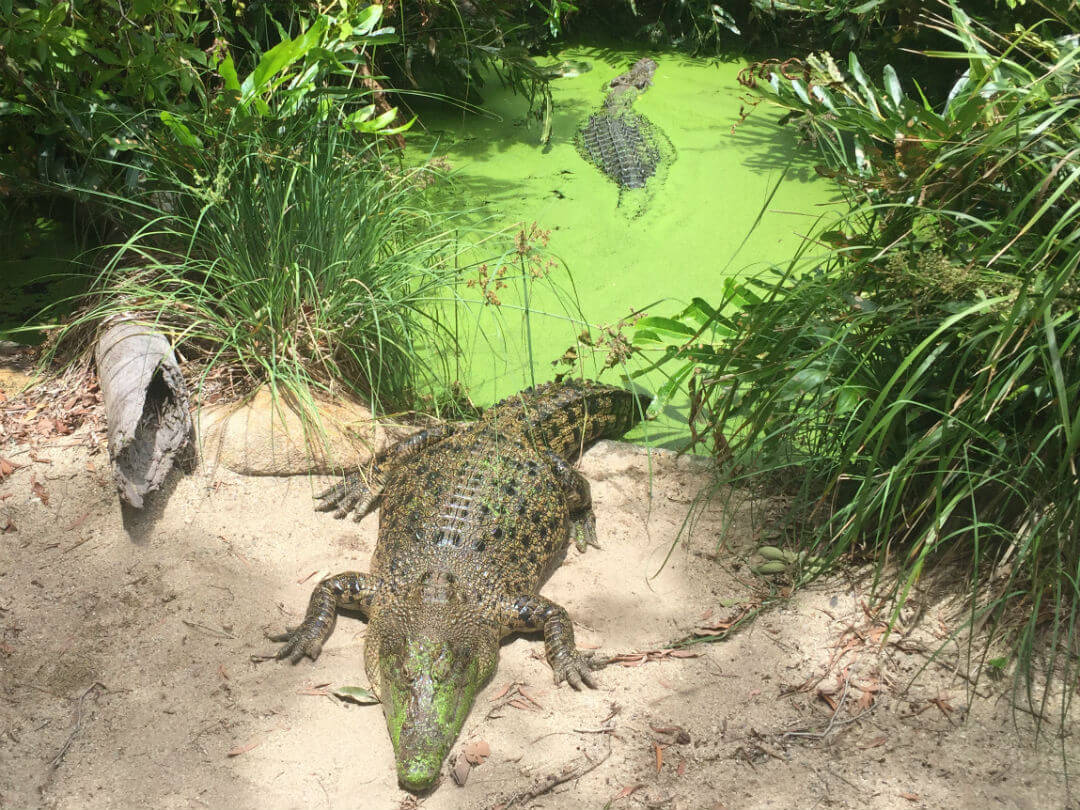 There are several boat ride times throughout the day at Hartley’s and today I was on the 1pm cruise. Being school holidays the waiting area is already busy with people waiting to board one of the 3 vessels. I was in the first boat with approximately 30 people inside. The guide very friendly and gives a detailed explanation about the crocodile habitat there. We cruise past “Ted” who is one of the oldest crocodiles in captivity and could be over 100 years old. Although blind and without teeth nowadays, he is top of the lagoon hierarchy.

Suddenly the boat no longer moves and everything is quiet. The guide removes a dead chicken from a blue box and tied it to a bamboo pole to give to the crocodiles. The chicken is dipped into the water and makes a splashing sound to attract nearby crocodiles. Whilst explaining how active the crocodiles are, one suddenly appears close to the boat and rises almost vertically out of the water to snatch the chicken. This is an amazing experience for all on the boat with many pictures and video footage being taken to capture the moment.

The boat ride takes approximately 25 minutes to go around the lagoon and is included with entry to Hartley’s Crocodile Adventures. 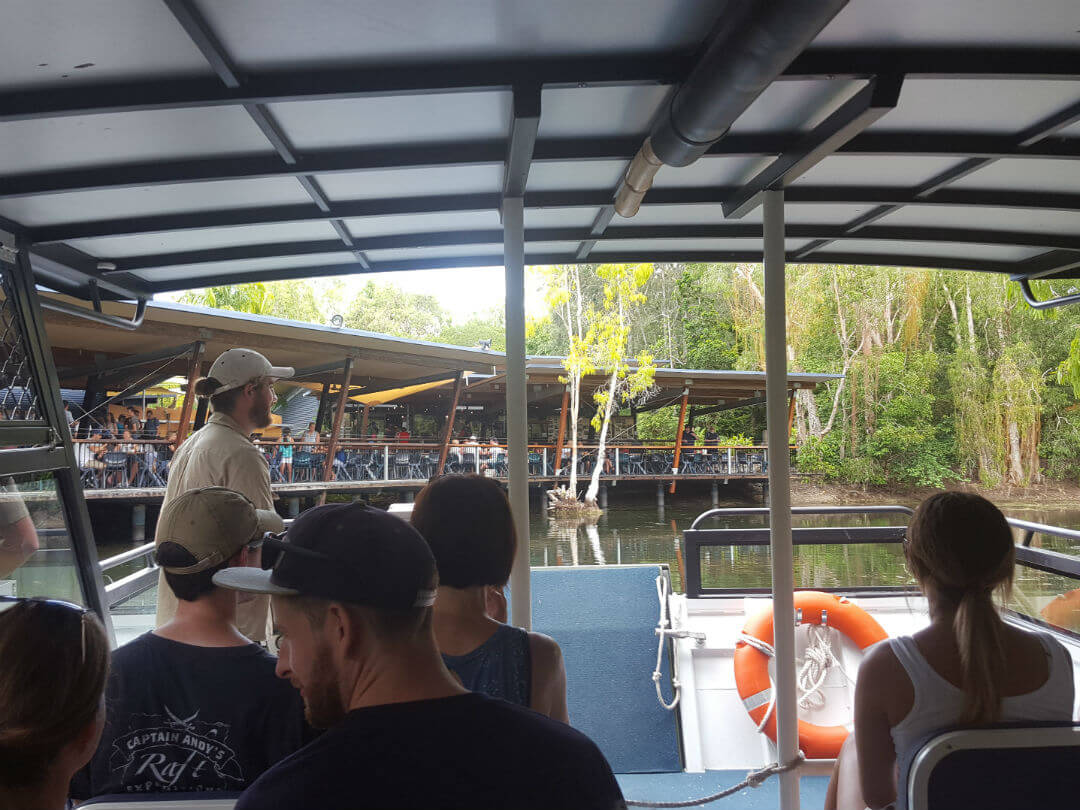 Afterwards we joined the guide for a farm tour. This is the place where the crocodiles are farmed to preserve their long term sustainability. The purpose of the farming is to deter poachers and culling of crocodiles in the wild and ensure there is an adequate supply to meet food and manufacturing demands from around the world.

There are many pens that separate crocodiles by their age. The nearest pen is stocked with crocodiles that are about 2 – 2.5 years old and these appear to each be about 1.5 meters long. Before finishing the farm tour there is an opportunity to touch a baby crocodile – softer than I had imagined, its colour is not like an adult crocodile, being prettier with yellow colours complementing the darker tones along its back. 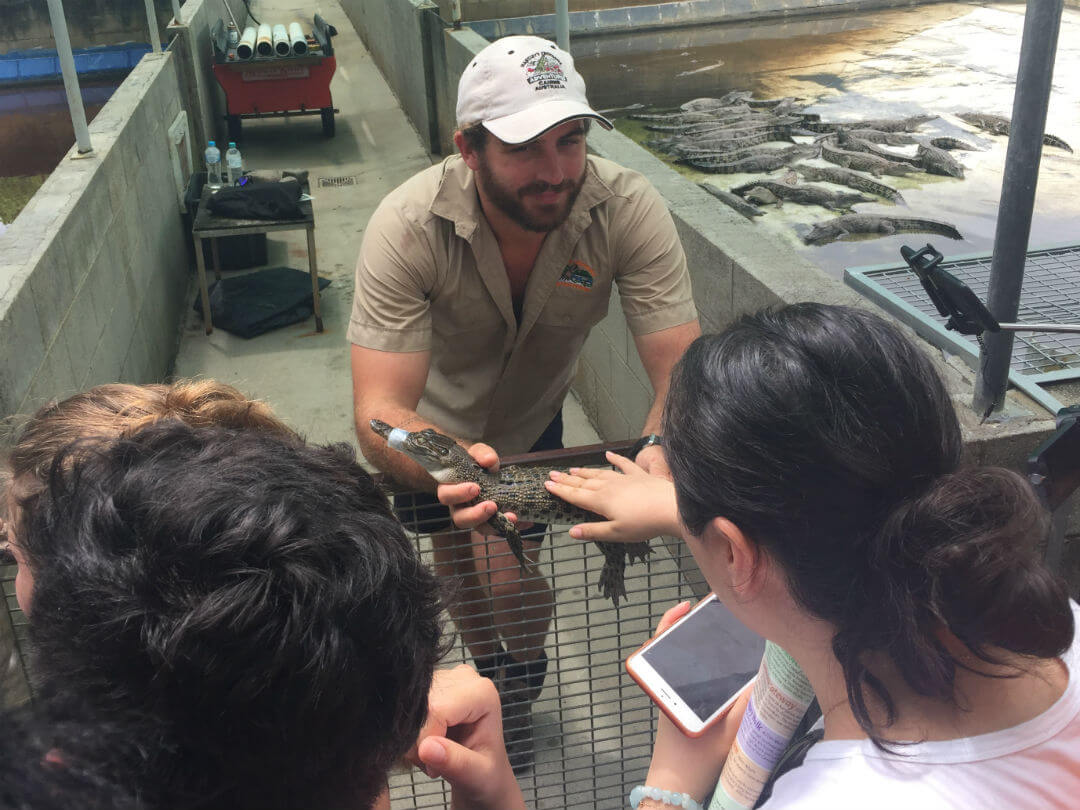 At 2pm there is a snake presentation in the Wildlife Amphitheater. This show seems to be very popular with most seats full before the show begins. The presentation is very informative, with about 6 different snakes being handled including the scrub python, corn snake and the aptly named death adder. The presentation went for about 45 minutes, and afterwards I decided to go and explore some of the other animal attractions.

The Cassowary is a shy and endangered rainforest bird. It is beautiful and so big. The bird has stiff, bristly black plumage, a blue face and neck also has something like a horn about 10cm high, sitting atop the head. The three-toed feet are thick and powerful, equipped with a lethal dagger-like claw on the inner toe. Definitely stay cautious if you see one of these in the wild! Nearby there is a walk-through aviary with some interesting owls to get up close to. 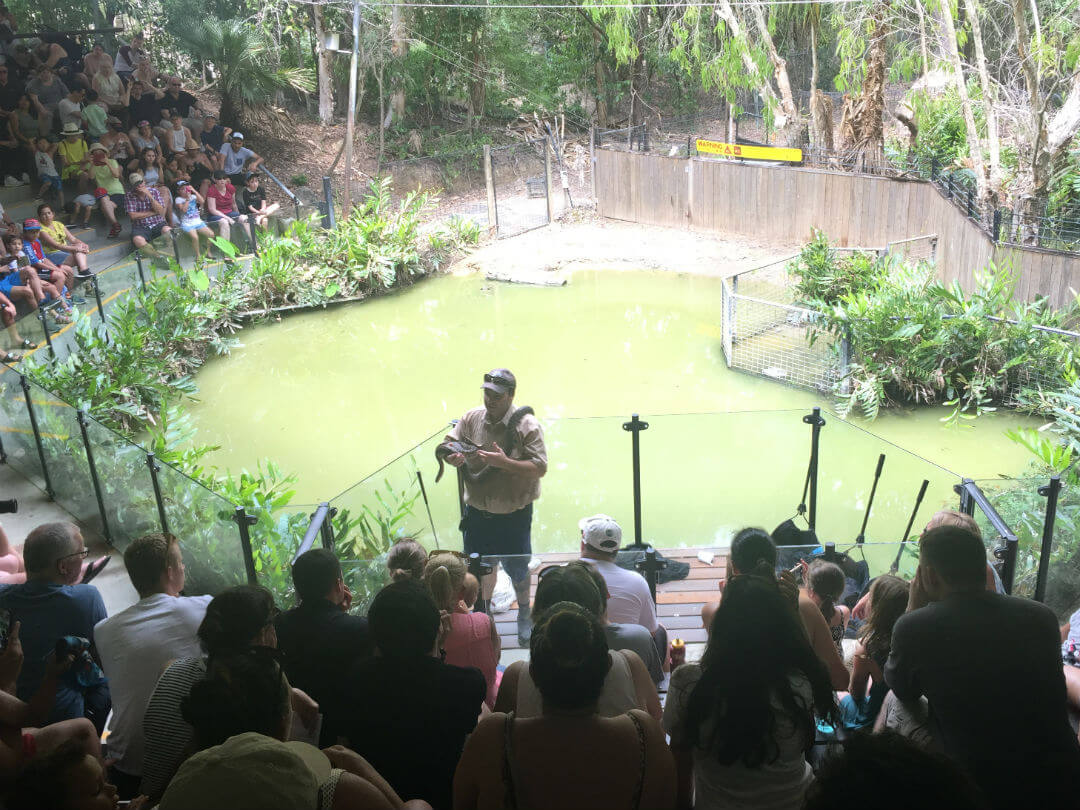 The last place that I visited is the Kangaroo and Wallabies garden. As a visitor to Australia, this is the part that I liked the most. I had the chance to hand feed Kangaroos and Wallabies and I was so close that I could pat them. Cuddling and hand feeding the baby kangaroo was amazing – I was lucky that there was a mother kangaroo with a joey she was teaching to feed.  As they hopped to the food and water area I was able to take some great selfies with them! Kangaroos have become my favorite animal now – with soft fur and beautiful eyelash they look gorgeous.

Hartley’s Crocodile Adventures was really fun, and you can see many different types of animals here, not only crocodiles. It’s a complete educational and informative place. You can also purchase photos with a koala, snake or crocodile and find some great souvenirs at the gift shop.  There is also an excellent restaurant located on the viewing deck overlooking the lagoon.  We spent approximately 3 hours exploring and since it was a hot day, this felt just about the ideal amount of time to spend here. 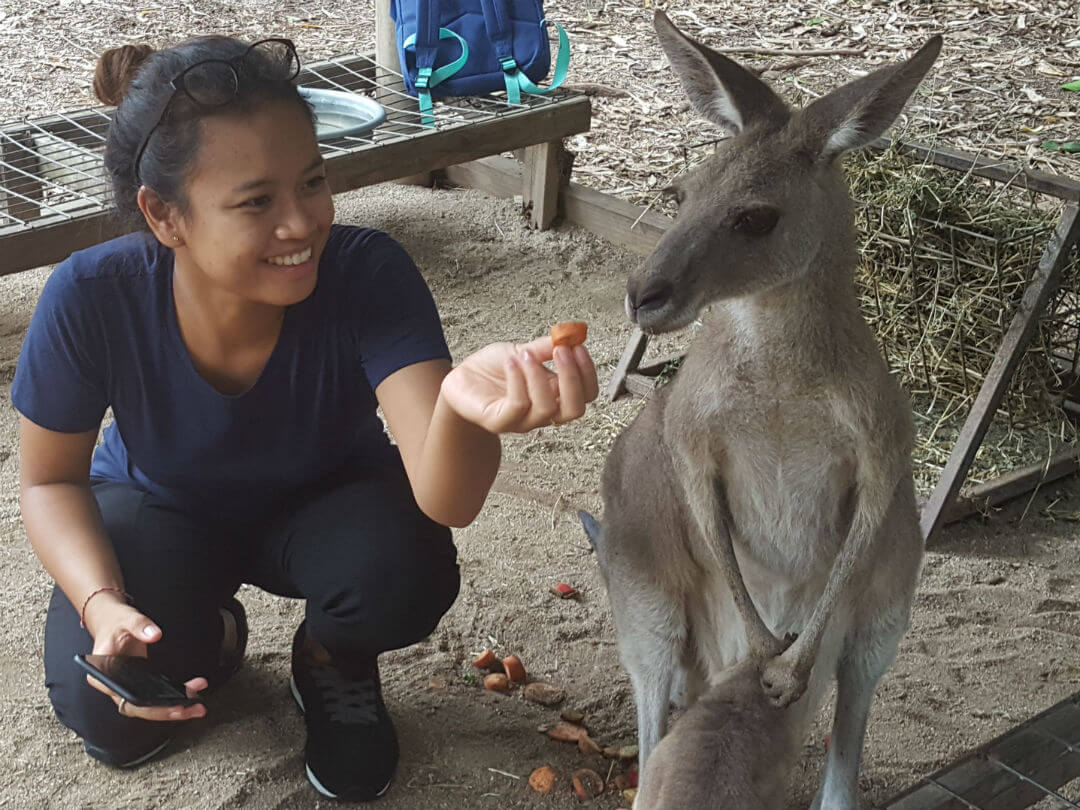